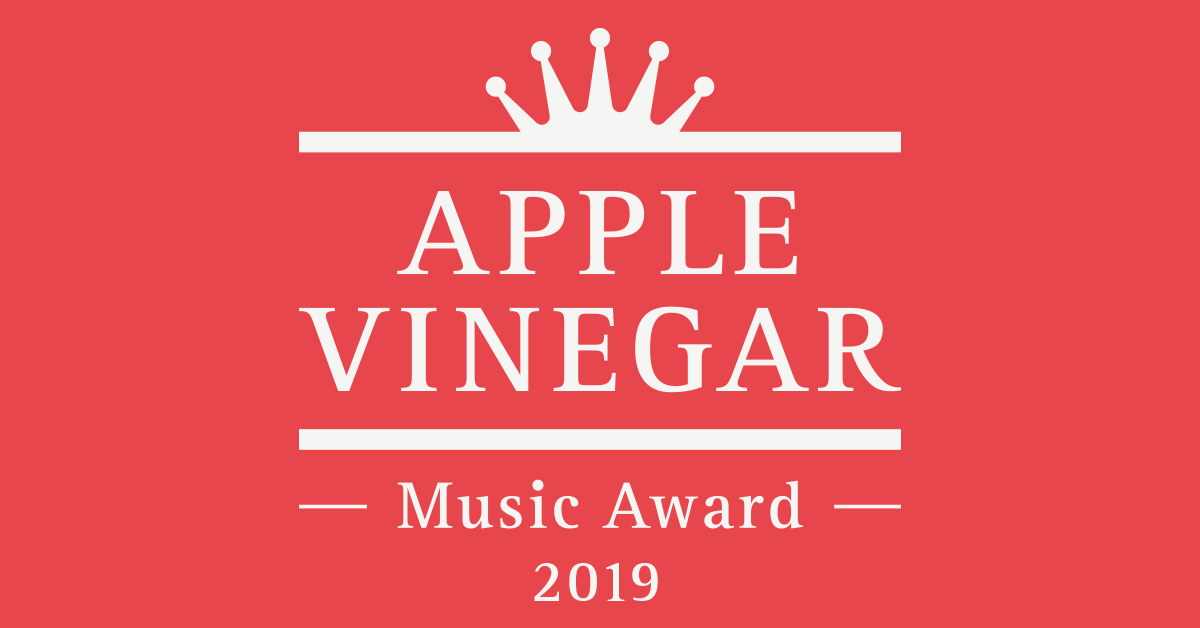 Hm. Hi, this is imdkm. I’ve posted nine entries since January. I dunno how many people reading this blog, but I hope someday these entries would be read by many music fans and make ‘em listen to Japanese pop music more. This year’s resolution of mine.

Well, today, I’d like to introduce an interesting project named “Apple Vinegar Music Award“. It is an independent annual award to shed the light on the year’s most excellent but relatively unknown releases of young musicians in Japan. It was founded by Masafumi Goto, who is ASIAN KUNG-FU GENERATION’s vocalist and guitarist, in 2018 (for those who doesn’t know ‘em, the band’s introduction is in the final paragraphs of this post). Nominees are selected by him and judges are well-known musicians in J-POP scene, who are friends of him–seemingly rather private than public, but its mission is very ambitious for just an personal project. I’m sure it’s worth to check it out.

Although Goto’s own musical taste is mostly rock music, many past nominees are from different fields. In 2018, four out of ten nominees were rappers or hip-hop groups (Yurufuwa Gang, Punpee, Awich, JJJ), and eventually, the Japanese rapper JJJ won the award. Of course, the award isn’t diverse enough to cover entire J-POP (there are no idol groups or dance music producers). But through this award, you can hear some interesting things going on in the recent J-POP scene.

This year’s nominees were more diverse in terms of musical styles. Singer and songwriters (Kaho Nakamura, Yuta Orisaka, Hakushi Hasegawa, AAAMYYY), a beatmaker (STUTS), rappers (VaVa, Kid Fresino) and rock bands (ROTH BART BARON, Gateballers, Tempalay, Age Factory, GEZAN). The winner of the year was Nakamura and three nominees, Orisaka, Kid Fresino, and GEZAN were selected as the honorable mentions. Since the award could fund 1,200,000 yen ($10,800 or €9,600) from supporters including Goto himself, the prize was distributed as below; 600,000 yen for Nakamura, 200,000 yen for Orisaka, Kid Fresino, and GEZAN each.

Fortunately, I have written about many nominees on this blog. 平成 was the very first post. Also, I’ve Nakamura’s AINOU, Hakushi Hasegawa’s 草木萌動 on this blog. For your convenience, each post has embedded Spotify playlist for the albums. I’m now planning writing the rest of this year’s nominees. My next post will be Kid Ai qing, which was one of the honorable mentions of the year.

Asian Kung-Fu Generation is one of the most popular rock band since known for their unique interpretation of 90’s grunge and Emo sound. Many songs of them were used by ultra-famous animes like NARUTO, Fullmetal Alchemist, and BLEACH. So if you’re familiar with these animes, you should know them by their songs such as “リライト (Rewrite)”.

AKG and Goto are also known for their remarks on Japan’s music scenes and the industry. For example, in order to share their influence and fascination with their listeners, they have held their own festival called “NANO-MUGEN”, where they invited their favorite bands from Japan, UK, and the US to play in front of the young audience in Japan. Recently, Goto often insists that Japanese music companies should make use of subscription platforms like Spotify and Apple Music more, instead of depending on selling physical media like CD and Blu-ray. AKG’s latest ホームタウン is an emotional guitar pop album rendered in simple and delicate, yet powerful sound. You should check this one, too.